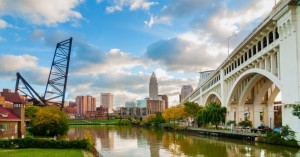 More than 300 bridges cross the Cuyahoga River that winds through Cleveland, Ohio. Key Tower, the tallest building between New York City and Chicago, marks the skyline. The city is home to the Rock and Roll Hall of Fame, Cleveland Clinic, the Cleveland Orchestra and more. It takes facilities, departments and people to run a thriving metropolis smoothly, and that can lead to a vast network of utility expenses.

For telecom alone, Cleveland had 454 accounts with 6,341 lines, 534 circuits and 1,444 cell phones. Except cell phones, each department managed its own telecom costs with no centralized oversight. The city’s electric service came from two utility companies that occasionally overlapped services and shared infrastructure! The city needed to clean up the chaos, but they couldn’t spare the personnel and didn’t have any funds available to pay a consultant. Cost Control Associates offered their contingency-based Energy and Telecom Cost Reduction and Recovery programs with no upfront costs.

Cost Control Associates began gathering information from the city’s telecom, cellular and electricity invoices. They would identify refunds from overbilling and review rates and structures for better options. Because the city’s line and circuit inventory records were incomplete, Cost Control analysts put on their detective caps to uncover details, verify them and create an accurate inventory. Without a single “go to” person for telecom costs, they had to dig that much deeper.

“$1.1 million in refunds and cost savings proved Cost Control Associates was up to the job.”

Cost Control’s experienced analysts know where to look and what to investigate. That led to their successful review of the city’s accounts. They found substantial overcharges from the local telecom company, and their detailed inventory records helped eliminate hundreds of unnecessary lines, circuits and cell phones. They also found significant overcharges on the city’s electric bills.

By scouring the city’s energy and telecom invoices, the Cost Control team produced $468,807 in refunds and $657,803 in annual cost reductions for a total of more than $1.1 million.

“We knew the task of analyzing our entire system of utility costs was a daunting one.”