When it comes to purchasing electricity, utility markets are complicated. Electricity markets are regulated in some states; others are unregulated, and some are a bit of both. The more you know, the better off you will be for getting the power you need at competitive prices.

A good starting point for a discussion on the cost of electricity begins with a basic understanding of regulated and deregulated electricity markets. Note that all energy markets are regulated to some degree in order to protect consumers and manage the national grid that carries electricity to homes and businesses.

Regulated electricity markets are more monopolistic in nature, because one or two utilities own the entire process from electricity generation to the consumer’s meter. The presiding utility generates electricity (or buys it from other generators) and sells it to customers. The utility owns the transmission lines, electricity poles, power lines and transformers that send the power to the grid that delivers it to consumers.

In a regulated state, customers have no choice but to purchase electricity from the area utility. The cost is based on a formula that balances usage and price with the expenses of generation and distribution. The utility is expected to make a profit, so it can maintain its infrastructure and reliably deliver power to customers. The specific transaction details are spelled out in one or more utility tariffs that have been approved by the state’s Public Service Commission or other governing entity.

Deregulated electricity markets are focused on competition where more than one company generates and sells electricity into the wholesale market managed through independent system operators (ISOs) and regional transmission organizations (RTOs). Retail energy suppliers purchase the electricity and sell it to customers. Theoretically, competition naturally strengthens markets and lowers prices. 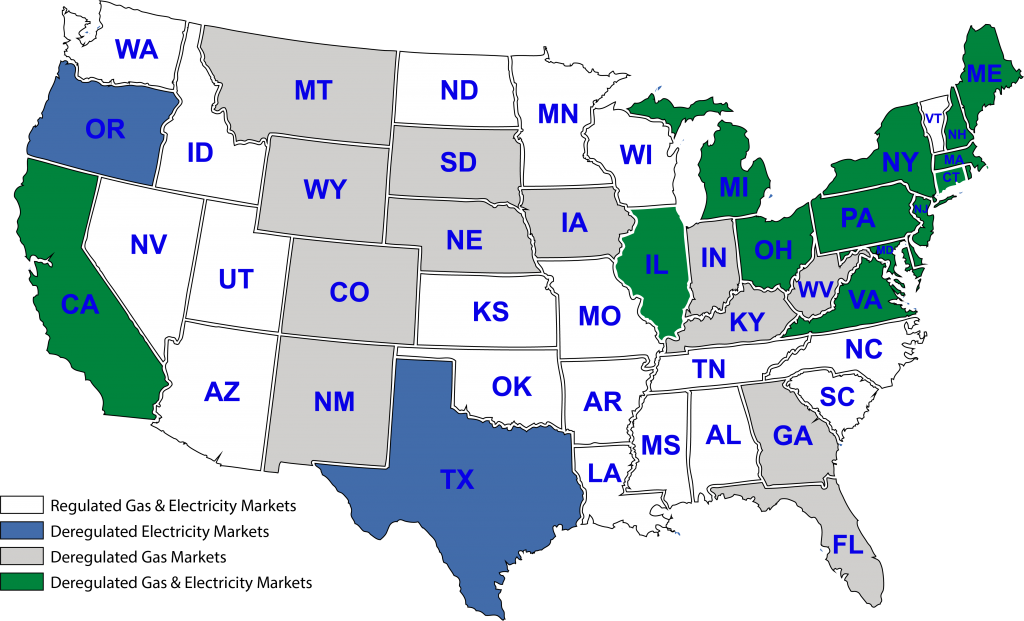 The individual companies may own their own power plants and transmission lines, but the utility or transmission company distributes the power and ensures the viability of the grid-to-meter connection. The utility is also the “provider of last resort” that prevents service interruption if the retail provider goes out of business or leaves the market. In deregulated markets, the consumer may choose which company to buy electricity from, based on price or preference such as a commitment to renewable energy.

Some states are partially regulated and deregulated, depending on the consumer’s location. This situation usually results from a combination of geography, state laws, historic factors, economics and consumer behavior and profile. For instance, a state may have a deregulated market in well-populated, easy to access areas; it may be regulated in remote locations where there is only one power provider.

A Brief History of Electricity Regulation

The regulation of utility companies by U.S. state governments grew out of a desire to protect consumers, who newly had the means to electrify their homes and businesses in the early 1900s. Electricity was exciting! With the flip of a switch, people could see at night, and businesses could expand their production hours. To answer the growing need for electricity, financiers saw an opportunity to make money by building their own power generation plants and setting up companies to sell electricity to the people their distribution networks could reach. 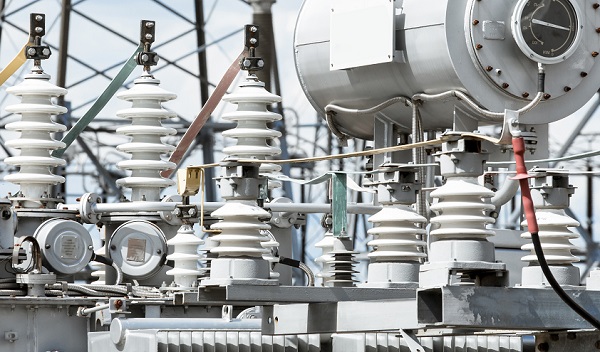 These individually owned electricity companies eventually realized that the high cost of infrastructure cut deeply into their profits. Rather than raise prices exorbitantly to cover those costs, these private companies formed partnerships to share the expense of building generation plants, equipment and distribution conduits.

Because one combined company (sharing one generation and delivery infrastructure) could produce power more efficiently than several independent companies, economists considered utilities to be a “natural monopoly.” Consumers had no choice in whom they bought from and had to pay the going price; but at the same time, the conglomeration of suppliers kept prices down.

With monopolies growing in other parts of the economy, progressive reformers became concerned about unfair price setting. They pushed for municipal ownership and/or state regulation of electricity markets. As a result, many municipalities established their own utility companies to deliver electricity to residents at reasonable prices. Yet there were fears that corrupt, local politicians might compromise operational quality and supply in order to line their own pockets.

Regulation at the state level seemed to be the right solution. In 1907 the Wisconsin and New York legislatures voted to regulate their state’s electricity companies. Each state established a commission that required utilities to develop standard accounting practices. They also played a role in determining rates and valuating the utility’s properties. By 1914, 43 states had established government oversight of electricity utilities. (To learn more about the long and bumpy history of regulation vs deregulation, read “Emergence of Electrical Utilities in America.”)

Let’s jump forward to 1977 when the federal government’s reaction to the 1973 energy crisis resulted in the formation of the Department of Energy. This act brought together several energy-related agencies under one umbrella and established a national energy plan to sustain competitive markets and provide affordable energy. The Federal Energy Regulatory Commission was introduced in 1977 to govern the transmission of electricity across the national grid. Among other responsibilities, FERC sets standards to ensure reliable, secure access to electricity that meets demand at a fair price.

Congress passed the Public Utilities Regulatory Policies Act a year later in 1978. PURPA created a structure for Independent Power Producers (IPPs) and opened the door to renewable domestic energy sources such as hydroelectric power generation. The Act required utility providers to team up with efficient non-utility power producers to deliver power at a lower price. PURPA promoted fairer pricing and encouraged energy conservation, among other things.

Deregulation took a big step forward with the National Energy Policy Act of 1992 that began the transition from state regulation of power sales to deregulation and competition for energy supply. Utilities could now buy and sell wholesale electricity competitively across state lines, while state utility commissions regulated distribution and consumer pricing.

The landscape of regulation and deregulation continues to evolve as electricity production changes. The steady growth of wind and solar energy augments our electricity supply. Improved methods of storage will change the ways we generate and use electricity. The push toward zero carbon emissions has encouraged many companies to move toward renewables. With technology and increasing electricity usage, the continuing oversight of generation will continue to morph to meet changing needs.

No matter where you do business, you have options for purchasing power. To limit your risk exposure, you need an extensive understanding of market trends and regulatory complexities for each state and utility where you conduct business.

Your go-to-market timing is key to obtaining the best prices. The availability and pricing of commodities (such as natural gas or coal) used to generate electricity can make prices rise or fall. Unseasonable or catastrophic weather—or geo-political events such as military conflicts or government policy changes—can affect pricing, too. Energy experts who study these markets and understand them historically can help cushion any surprises.

If your organization does not have the in-house expertise needed to purchase electricity, natural gas and other fuel supplies, consider turning to an experienced, independent consultant. A knowledgeable advisor can help you develop a business energy procurement strategy that lets you exercise your choices wisely.

Joe Scicutella is an energy procurement analyst for Cost Control Associates. He helps his clients obtain energy supply at the optimal price. He keeps his thumb on the pulse of the energy marketplace by monitoring supply, providing insights, working with suppliers to obtain pricing and negotiate contracts. Joe currently manages more than $2.5 billion in total client annual spend and has saved his clients more than $2.8mm on costs since July 2019. Learn more.