Time to Turn the Clocks Back 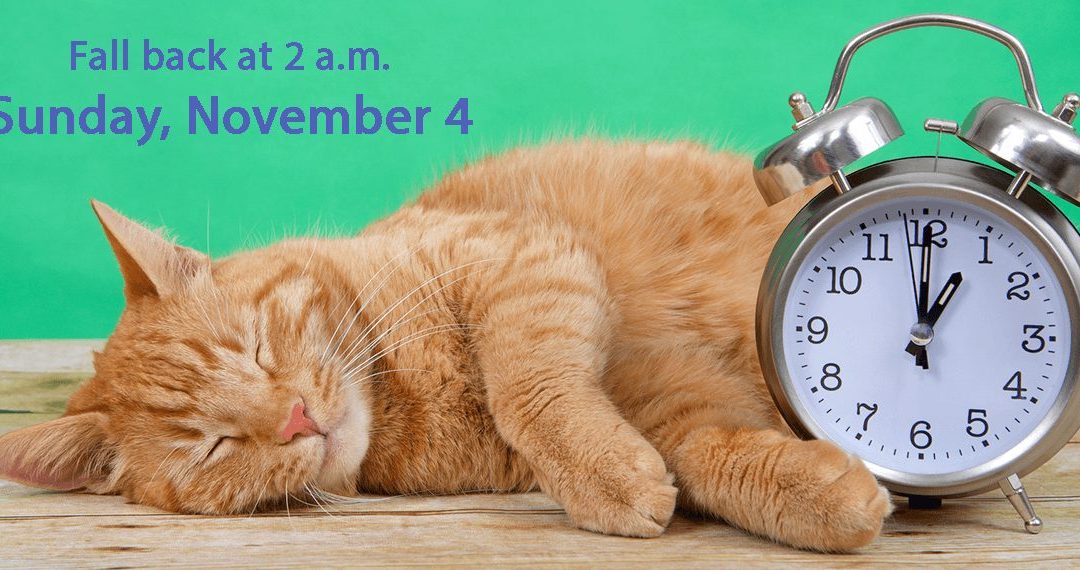 Ready for a Cat Nap?

Turn your clocks back one hour when you go to bed this Saturday night and catch an extra hour’s sleep. Daylight Saving Time ends at 2 a.m. on Sunday, November 4th, but most people won’t feel any benefit from that extra hour.

The time change signals a disruption in the Circadian rhythm that runs our internal body clock, and that can lead to a groggy and grumpy mood. To fight the time-change blahs, health advisers suggest you keep to your regular schedule and get some exercise (preferably at the same time each day). If you feel tired, take a short nap of 15-20 minutes—but no longer, or you’ll disrupt your nighttime sleep which is already in jeopardy.

A Harvard Health publication reports that it is more likely that people will rouse early, have trouble falling asleep and wake up during the night. This is especially true for people who routinely get less than eight hours of sleep or are naturally early risers. Ironically, the only viable cure for the time change is time itself. It takes about a week to re-sync your body with the hands on the clock.

The twice-a-year time change has never been popular. Farmers who base their work schedules on sunrise and sunset feel cheated of an hour’s work. This is especially true for cranberry farmers on the eastern seaboard who lose productive daylight hours from their annual fall harvest. For cities and school districts, early evening darkness increases electricity costs spent on illuminating office and school buildings, sports fields, parks and parking lots. Businesses and other organizations lament the lack of production or mistakes made by sleepy employees. Studies have also shown an increase in crime and car accidents.

At least a dozen states have taken steps to pass legislation against Daylight Saving Time (DST), but only the Federal government has control over the beginning and end of DST. At the end of World War I, the Standard Time Act established our time zone system as well as the start (March 31) and end (October 27) of Daylight Saving Time. Congress later abolished DST as a rule but enabled a local option to observe it.

During World War II, President Roosevelt established “War Time,” a year-round Daylight Saving Time designed to boost production and the war effort; it ended with the war in 1945. After that, it was again left to the states to decide when and if the clocks would change. Frustrated by inconsistent times from state to state, the transportation industry lobbied against DST. This led to the Uniform Time Act of 1966 that mandated standard time with an option for DST as long as it was uniform state-wide, though there are a couple of exceptions. The Energy Policy Act of 2005 lengthened DST from the second Sunday of March to the first Sunday of November.

Who Does and Who Doesn’t?

Who observes DST and who does not is as clear as mud, though time zone apps on mobile phones certainly make it a lot easier to figure out. Consider these variations:

If you live in a region that observe Daylight Savings Time, remember to turn your clocks back before you go to bed on Saturday night!

If your energy costs increase as a result of the time change, consider a review of your year-round invoices. Cost Control Associates may be able to save you money. Contact us to learn more.