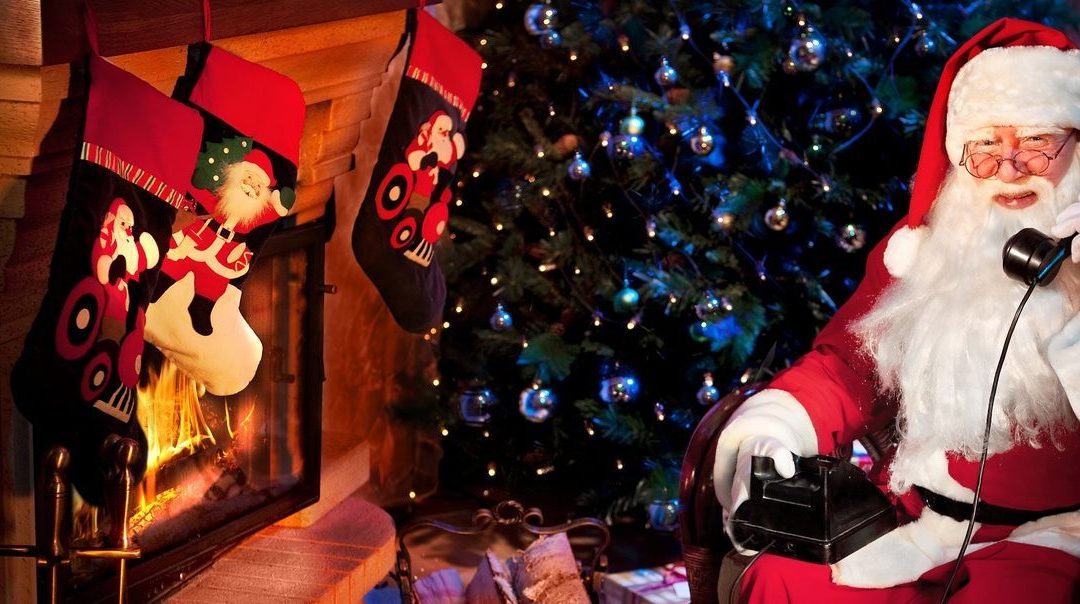 When Santa Claus and his senior management team at Santa’s Workshops, Inc., closed the books on Christmas 2015, they were sad to see they had once again exceeded their utility budget. Seemingly endless supplies of energy were required to keep the toy factories running, and it didn’t help that Mrs. Claus was pushing out tray after tray of gingerbread men from her commercial kitchen ovens.

The North Pole climate meant year-round heating costs, and the 365/24/7 operation consumed a great deal of electricity. Santa’s Workshop needed to trim costs, but elf-power was limited, and none of them were utility experts.

“I knew we needed an experienced consultant to help us, so I told the elves to start asking around,” said Santa. “Everyone told me Cost Control Associates was the best, so I gave them a call.”

“When Janis told me she had Santa Claus on the line, I was skeptical,” admitted Keith Laake, president and founder of Cost Control Associates. “I feel a little bad now, because I put him through the ringer getting him to prove his identity. After all, it’s been a long time since I believed in Santa Claus. I’m a trained CPA, and I like proof.”

Allison Levin, analysis team director, suddenly saw a flash of bright light streak by her office window. “I was getting ready to go home and bake Christmas cookies with my kids. Within seconds, I heard a hearty ‘Ho-ho-ho!’ coming from Keith’s office.”

“I saw a soft sparkle of light that grew into something bigger right before my eyes,” said Keith. “Suddenly Santa Claus himself was standing in my office! His jolly red suit, curly white beard and legendary twinkle were dead giveaways. Santa Claus needed our help!”

Off to the North Pole 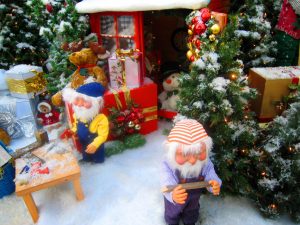 The team was excited to do an on-premises lighting study at the North Pole and eagerly packed their bags. After completing a lighting retrofit, the elf workstations used less electricity with the installation of new, brighter LED lighting. Energy from stored moon-and-star light cut down on electricity to light the elf pathways and Santa’s sleigh runway. The new lighting not only reduced electricity usage but cut down on maintenance costs.

Meanwhile another Cost Control team focused on waste removal costs. There were hazardous and e-waste from last year’s electronic toys and games, half-empty cans of red and green paint, powerful glues and discarded glitter. Significant organic waste was generated by the elf cafeteria, the cookie-and-candy kitchens and the reindeer barns. Recycling costs were another consideration.

Can You Hear Me Now?

Running a time-sensitive international distribution center requires each elf to have a cell phone with real-time access to the Naughty-and-Nice database. Research & Development relies on internet access, and Santa’s sleigh requires foolproof GPS.

Cost Control telecom analysts studied all of the Workshops’ telephone lines and circuits to be sure they were paying for what they were using. They eliminated internet access in buildings where it was no longer used and added high speed lines where they were needed most. They determined that Santa’s existing cellular data plans were not making efficient use of shared minutes and other offerings. It was especially important to avoid roaming charges for Santa on December 25th. 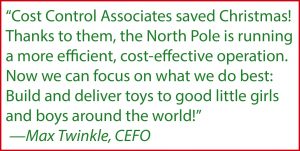 By the time Christmas 2016 rolled around, Santa Claus was feeling much better. He and his team now know exactly what they are paying for. Cost Control found thousands of dollars in refunds for billing errors and mischarges and cut the workshop’s annual costs significantly. Santa is so pleased with the results, he’s talking to Cost Control Associates about their other services.

So this year, when you find presents under your tree, remember the role Cost Control Associates played in bringing you Christmas. If you want your organization to run as smoothly as Santa’s Workshops, get in touch.